Sculpture by James Marsico - Sculptor - Powell, Wyoming
To place a order or to make a deposit or payment or to ask questions.
Please call 1-307-272-5809. I welcome all major credit cards. Thanks!

“I thank the Lord for the desire, inspiration and talent that I have.
I am constantly striving to improve and learn with each new sculpture and to be the best artist I am capable of becoming.” 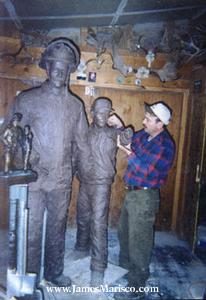 Jim at work on “The Volunteer”

James has been a full-time artist and sculptor since 1970. James works out of his studio and gallery, Mountain Valley Artistry, in Powell, Wyoming, which is in the heart of the Rocky Mountains by Yellowstone National Park.

James has been been honored with several fine art awards, and he has completed several monument size bronze sculpture editions. He welcomes commission work. James has national and international collectors. Number one of his life-size elk monument bronze “Yellowstone Bull” was shipped to a collector in Geneva, Switzerland. His monument sculptures can be found from coast to coast. He recently completed several life-size sculptures for the Grand Teton Visitors Center in the Jackson Hole town of Moose, Wyoming.

Jim at work on “Ram Country”

In addition, museums, including the Smithsonian Natural Museum of Natural History in Washington, D.C., display some of his work. At the Smithsonian, he directed the mounting and installation of a pronghorn antelope taxidermy diorama. This diorama includes the life-size custom mounts of a complete family of pronghorns.

“My wife and I collected the flora and fauna for the diorama near my home in Wyoming,” James said. “Thousands of people walk past this national exhibit everyday.” The Pronghorn Society, the Wyoming Taxidermist Association, and the Wyoming Outfitters Association commissioned this project. 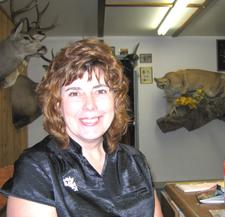 Bernie Marsico, my wife of 46 years and office manager

James grew up in California’s Napa Valley in Marin County. “My father, James M. Marsico ran the winery Cuvasan Wines and also was well-known as a master gun smith and engraver,” James said. “My dad was an Air Force veteran of WWII, Korea, and Vietnam. My dad was truly a great artist and a major influence on who I am today.”

“My grandfather, also named James, was also an artist and inventor, from Creekside, Pennsylvania,” James added. 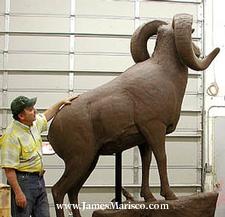 One thing James took away from working for five years from 1970-76 at a large taxidermy and artist studio in Alaska was how to sculpt the “manikins,” or exacting animal forms, which support the tanned skins of the trophy to be mounted. This type of exacting life-size sculpture is very demanding.

“You have to learn animal anatomy to recreate realistic animal sculpture, and a very useful discipline to accomplish this is taxidermy study. The two art forms complement one another very well.” 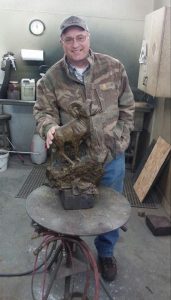 In the early 1970’s, James moved to Park County, Wyoming, and he began sculpting and casting miniatures for bronze limited edition castings. They were quickly a great success for him.

James was a volunteer firefighter in Powell, Wyoming, for eight years and received the departments’ “Firefighter of the Year” award in 1994. He is a certified state, city and wild lands firefighter.

“My wife and I (46 years and still in love) have a son, Joe, and three daughters, Christi, and the twins, Anita and Annette,” James said. “We now have five grandchildren.”

To place a order or to make a deposit or payment or to ask questions.
Please call 1-307-272-5809. I welcome all major credit cards. Thanks!
All images and text protected by copyright ©2017 James Marsico and Mountain Valley Artistry - Powell, Wyoming. All rights reserved.